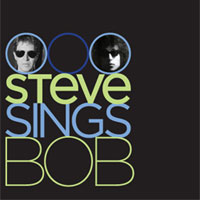 Steve Sings Bob â¢ Deluxe 2018 Digipack Version â¢ Limited Edition Of 500 Copies
The first edition of this CD came out in 2009--a slipcover version of 300 that sold out in a week.

My just--finished European tour with Chris Cacavas seemed like a nice time to do a reissue--we were planning on rocking a few Dylan songs at the shows and Chris plays on several of the tracks on the CD. Edgar Heckmann at Blue Rose Records printed up 500 copies of a sleek, new 4-panel digipack version with liner notes written by yours truly to tie into the tour.

But we sold every copy we hadby the 5th show! We tried to get more. Unfortunately, the various parcels from DHL and FedEx kept chasing us all around Europe. A comedy of errors. We finally got some in Vienna, four shows before the end of the tour. There are still a few left over so grab yours before they're gone again.

STEVE SINGS BOB is the kickoff release from Steve's new Short Run Records, a series of limited edition (300 in this case), signed CDs of archival as well as off-the-beaten-track new material. This first release is a collection of various covers of Dylan songs that Steve has recorded since 1982 with his extended family of musical pals.

The Dream Syndicate had just played a well-known TV show in Germany and the show's host Alan Bangs invited me back to his place for some serious drinking and record listening. He had an incredible collection and saved the crowning jewel for last. It was an unreleased Dylan track from the "Infidels" sessions called "Blind Willie McTell." I couldn't believe it. How could this song, so much better than anything else from that session, have been left off the album. I felt it was our mission to let people hear the song and, much like an enthused town crier, it felt best to spread the word with my own voice. This version is from the late great Deirdre O' Donoghue's radio show on KCRW in Santa Monica and one year later it was released as a single by the UK magazine "Bucketful of Brains," marking the first time the song had officially seen the light of day, a few years before Dylan's version was released on the first of his bootleg series. We even had to get the permission of his publishing staff to put out our version before he did. I like to think that Bob sat in his home one night, listened to our version of "Blind Willie McTell," smiled and said "That will do."

Loose Change is the name these days for whatever combo I put together on short notice, usually on my periodic returns to my LA homeland. This was a show at Molly Malone's on Fairfax Avenue and was a combo of good friends with whom I've played many times so it was not a great risk to suggest a Dylan song I'd never played before and to perform it without rehearsal. Here's the thing about covering Bob Dylan song: It's relatively easy for the band. I mean, it's not like you're playing in a Yes cover band or something. The songs are simple, direct, very few chord changes, settle into a groove and stay there for the most part. And that's great. But for a singer? Well, I do admit to getting some lyrics wrong at several points on this CD and, for that, I humbly apologize. On the other hand, all of the memorizing is well worth it to be able to rear back and deliver the classic "You'd know what a drag it is to SEE YOU!" This is the first and only time I covered this song. And it was one of the many times I had the pleasure to share a stage with my friend Duane Jarvis who passed away earlier this year. Duane, we miss you.

Another KCRW performance (I played live in their studios about twice a year between 1986 and 1994). But I really can't remember the circumstances behind this one so I turn it over to our Guest Liner Note Editor, the one and only Robert Lloyd: "This was part of a daylong July 4 Bob Dylan special on KCRW co-hosted hosted by singer-songwriter John Wesley Harding and writer Paul Williams, for which I was bandleader and traffic manager. (Other performers included Dave Alvin, Paul Kelly, Rosie Flores, Peter Case and Ronee Blakley. And Wes, of course.) Besides myself, the house band here features Doug Freeman (a fellow Lopez Beatle and also a member of Gutterball guitarist Steven McCarthy's great post-Long Ryders band Walker Stories), Steve Wagner (The Balancing Act and Walker Stories, now a master brewer) and Steve Mugalian (man of a thousand bands, including Duane Jarvis's last). Steve chose the song himself -- perversely, some might say -- and my memory is we ran this down with him for the first just prior to playing it on the air. Like a Sinatra session."

The mighty Miracle 3 run amok on one of the many great songs from "Love and Theft." We played this several nights on the 2003 European tour for "Static Transmission" and this version is from the Burgerhaus in Heilbronn, a show booked, promoted and hosted by Blue Rose Records head honcho Edgar Heckman. I recently went back and heard the original version and was shocked at how almost gentle the Dylan version appeared after working on this record for the last few months. Hmmm - ..I think Bob may need to hire us for his next tour.

I was in Berlin on a promotional tour for " - Tick - Tick - Tick" and found myself opening for my old pal Alejandro at the Knaack club. Al and I go back to the days when Rank and File and the Dream Syndicate were labelmates on Slash Records and would often share stages, jamming on very long versions of favorite old classics by the Velvets and Dylan. More than 20 years later here we were doing the same thing. It's nice that some traditions don't go away.

This is an outtake from the original version of "Live At Raji's" and later appeared on the reissue so many of you may already have it in your collection. But it warrants a second listen because it's freaky, involves serious reinterpretation, features amazing guitar work from Paul AND was completely unplanned and unrehearsed. You know, it's funny. We knew we were making a live record that night, we had Elliot Mazer in the control room making sure it sounded great and it was going live to DAT which meant NO mixing and no overdubs and yet we didn't hold back, didn't play it safe and just played the gig like another night in a very exciting and fiery 4 years of playing together. And it's why it might be the definitive Dream Syndicate album.

Another KCRW show and another advocacy of a lesser-known Dylan song. I mean, HOW can the guy leave songs like this off his records. I remember hearing it first as a b-side of "Heart of Mine" when I was working at Rhino Records and playing the song day-in, day-out for months. Just an incredible song. And I'd like to think that on this occasion we certainly gave the original a run for its money. This was my live band during the "Kerosene Man" tour and on this performance we were joined by Julie Christensen who sings on that album and was also in Leonard Cohen's touring band for many years. She emphasized the gospel truth of the lyrics and Robert Lloyd's organ testifies mightily.

From the "The Day Before Wine and Roses," the album that documents the KPFK (Los Angeles) radio show we recorded at 3am just a few weeks before making our first album. We did a lot of covers at the time but all of them ended up sounding like - us. To be honest, I think I was more inspired and enthralled at the time by the version of this song by the Soft Boys and this version certainly owed more to theirs than to the Dylan original. I remember that we bought a 6-pack of Mickey's Big Mouth malt liquor at the gas station across the street just before they stopped selling at 2am and, come to think of it, that might be a bigger influence on this recording than either version.

Ah, the legendary Hazel Motes. We only played the one gig at Magnetic Fields in Brooklyn where this very lo-fi version was recorded. But the band already has a local following, mentions across the internet and was praised by the Village Voice. And now that I'm listening to this wild, exciting reworking of Dylan's call for faith (any faith, really) I'm thinking it might be time for a second gig. I think the 21st Century needs its own Mad Dogs and Englishmen, after all.

Be careful what you wish for, indeed! Jason and I hit the stage for an encore after a Miracle 3 show in Frankfurt's legendary Sinkkasten and heard a request for "Like A Rolling Stone." Hey, I aim to please and am not one to back down from a good challenge. Strangely enough, I had never played the song but, of course, had heard it countless times, same for Jason. I started playing the song (in the wrong key, no less) and immediately found myself knowing (almost) all of the lyrics and Jason's fingers knew right where to go for the trademark Bloomfield lick. Funny what the brain will do when the pressure is on. Now, why can't I remember where I left my keys?