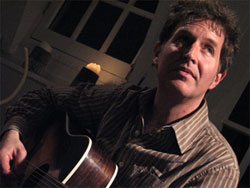 I love playing House Concerts (or Living Room Shows, take your pick) They're a completely different experience from a club show. All of the artifice is stripped away. No stage, no dressing room, no barrier between the performer and the audience. The shows seem like one step closer to the way music was intended-traveling from town to town, telling stories and making friends.

Most of the people I've met in the house concert world were a little surprised at first to find that such a thing was even possible. Could it be that simple to open your living room to 50 or 60 friends and local music fans and then have a face from your record collection come to life, taking requests and meeting your kids and asking where to lay his coat? But I'm not the only touring musician who has found the joys and refuge in these kinds of shows. Friends of mine like Peter Case, Amy Rigby, Wreckless Eric and many others have been doing them for years.

It's easy. You just contact your favorite touring troubadour, tell him how you want to do the show, offer up a date and you'll most likely hear "yep, sounds great." Sometimes you can fill up your audience with your pals and sometimes you can ask the musician to put the word out to his fans as well. I've done shows by myself or as a duo with Jason Victor. Sometimes I bring the whole band along. No two house concerts are ever the same.

Some 9 months before my 40th birthday, I'd mentioned to a friend that I'd spotted the 'House Concerts' link on Steve's website. I'd seen Steve live in London a year before and had an amazing night there. A crazy idea started to form over dinner one night... how cool would it be to have a unique and custom-built show put on by one of my favourite artists!? Was it possible? YES - and surprisingly easy too. I emailed Steve and the dates worked out for him and costs were agreed, so it was game on!

It was a blank canvas in terms of format. I went for a guitar duo combo - Steve (acoustic) and Jason Victor (electric). It was fun putting together a list of possible songs for inclusion, mostly Steve's own material, but with some covers thrown in too. There were a few other things left to arrange - book a function room at one Cardiff's many pubs, sort flights, accommodation, PA and lighting hire.

It was to be a game of two halves, so here were some of the many highlights... Stoked-up with Irish stew (and a vegetarian option), Steve and Jason took to the stage! The boys kicked off with a storming Nothing But The Shell and accelerated through the next hour to reach the dizzying heights of Amphetamine and the manically energetic The Days Of Wine And Roses. Along the way, we were graced with the presence of Carolyn and the seldom seen Kerosene Man, to which I danced badly but with considerable spirit. Considering the dark subject matter, Burn wasn't perhaps the most obvious song for a party, but (as it turned out) this got one of the biggest cheers of the night! The closing words from Steve at the end of the first set were, "have some beers and have some fun - party set coming up!". Nothing to argue with there - mine's a pint, thanks guys. 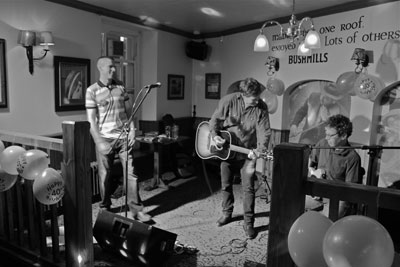 With just a slight tweak to the sound mix (more guitar!), the second set opened with Neil Young's Rocking In The Free World, then onto two tracks by The Who (although no guitars were harmed on the night). After The Boy In The Bubble there was...oh my! an invitation from Steve to join him on the stage for that Born To Be Wild vocal moment. I fired all my guns at once and exploded into space...

Things continued into the noisy ascendent with a neat Wales-meets-New-York segue of John Cale's Fear Is A Man's Best Friend melding into The Velvet Underground's classic Waiting For The Man. I'm amazed that all the strings were still on the electric guitar by the end of that one! Go Jason!

Fittingly for the weather of Wales, there were two 'rain' themed songs - Clapton's Let It Rain and Steve's own Death Valley Rain. I couldn't help myself with the latter and was back up on the stage again as unexpected guest vocalist. Well, if you can't sing at your own party, when can you? And I can only sing a bit.

500 Girl Mornings brought the set to a close... but surely that wasn't the end? Of course not, things shifted into request-a-song! Accompanying Steve on vocals on When You Smile will surely be one of those memories I'll always cherish. We were all then transported off to a Strange New World and were then asking If There's Something I Should Know. I've often remarked that no party is complete without a song about a stalker. With only a few minutes left before the bar closed, the crowd cried out for more! One more song, so its got to be Wired hasn't it. The crowd really did go wild.

A friend later commented that, "Tuesday and Amphetamine, live, up-close and personal. It doesn't get much better than that!".

How right he was.

Shows Available at the Traders Site