Here's To You Max Morlock... Danny & Dusty Live In Nuremburg 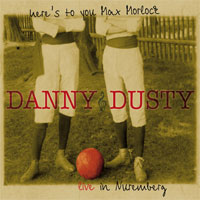 Danny & Dusty Live In Nuremberg is a 2CD/DVD souvenir of the band's complete April show at the K4 club in (where else?) Nuremberg.

The recording was assembled by the same audio and video wizards that put together Live Tick by Steve Wynn & The Miracle 3.

Max Morlock? Well, I bet some of you football fans already know but ol' Max was a star of the Nuremberg team back in the 50s.